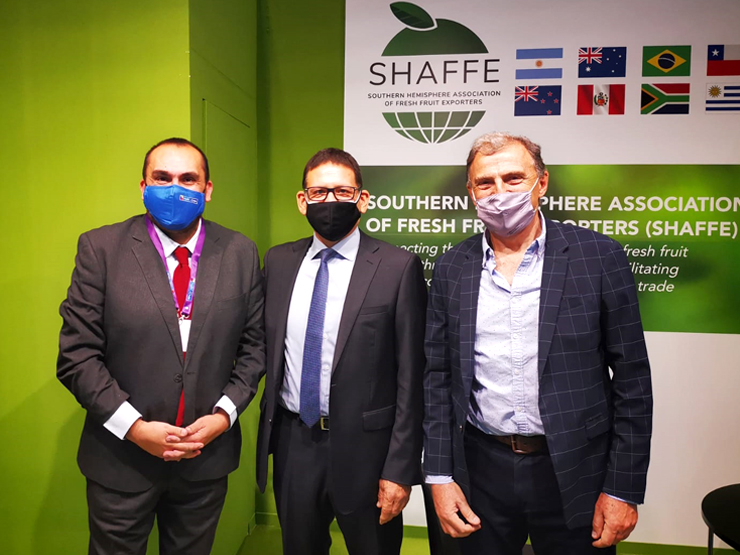 SHAFFE leads the Sustainability strategy of the fruit exporters of the Southern Hemisphere and presented its first perspectives during the Fruit Attraction. The ABC participated as a member of Frutas de Argentina. The thirteenth edition of the European Fruit Attraction fair was held in Madrid, Spain, from October 5th to 7th.

During the fair, SHAFFE – The Association of Exporters of Fresh Fruits of the Southern Hemisphere- organized the seminar “How the sustainable produce sector could look like in 2030“, which was held on the 6th October in a hybrid conference format (virtual and live), in which participants and SHAFFE representatives had the opportunity to share some of the learnings and perceptions of the last 8 months of work, as well as their visions of how the sustainability strategy of the Southern Hemisphere should be.

Argentina was present as a member of the Frutas de Argentina alliance, which is part of SHAFFE and represents the interests of the exporting sectors of blueberries, cherries, pears and apples and citrus.

For the Argentinean Blueberry Committee (ABC), the work axis based on the sustainability is a priority in the triple impact business model that the sector defined for its production: a model that seeks high standards based on the social commitment, responsibility and care for the environment, and profitability based on quality differentiation, always attending to the new demands of the world’s consumers, who are increasingly attentive and demanding with commitments and the way the food they choose to consume is produced.

The presentation at Fruit Attraction

“Sustainability is not a foreign issue for Southern Hemisphere fruit exporters.  In fact, it is a matter in which each member of SHAFFE is making great and diverse efforts at both production and export levels.  Therefore, SHAFFE’s objective is to generate a strategy that not only reflects where the fresh fruit industry of the South is heading, but also the aspects that are important for markets and consumers in these matters”, says Charif Christian Carvajal,  SHAFFE President.

Nelly Hajdu, Secretary General SHAFFE stressed the importance of developing a sustainability strategy for the Southern Hemisphere.  “Our purpose with task force is to invite all our members to build a White Paper on Sustainability. We are all united by common challenges about it, therefore, the way forward is to face them together, collaboratively and with a common strategy”.

During the task force process the following 10 common Southern Hemisphere Sustainability Challenges have been identified:

“We hope to have the White Paper ready within the next few weeks, with practical, real and possible actions to be taken by 2030“, says Carvajal.

The SHAFFE sustainability committee is made up of Marta Bentancur from Uruguay, Paul Hardman from South Africa, Ricardo Adonis from Chile, Jorge Souza from Brazil, Gary Jones from New Zealand and Gabriel Wasserman from Argentina, who will also lead the group.