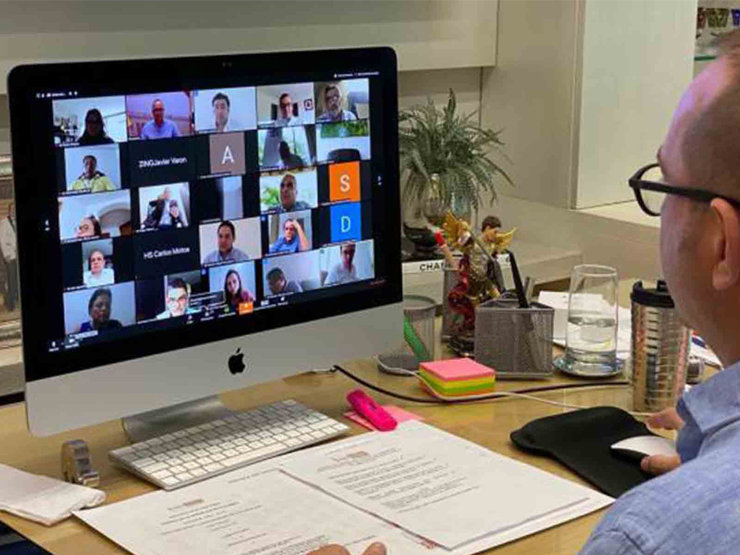 The implementation of virtual communication platforms worldwide has opened a unique business opportunity. In two months, the Argentine Blueberry Committee, together with the Ministry of Foreign Affairs, has planned 5 business rounds, an unthinkable frequency compared to “face-to-face” business. New business transactions to Saudi Arabia and the United Arab Emirates, among other new markets, are being carried out.

New communication methods have opened up a key opportunity for Argentine blueberry exporters: the possibility to reach non-traditional markets that would otherwise have been more difficult to access due to the characteristics of the market itself and the cultural features of the importers.

For the past two months, the Argentine Blueberry Committee (ABC) has been organizing a series of business rounds between local exporters and importers from several Middle Eastern countries together with the Argentine Foreign Affairs Ministry and its representatives abroad.Soon, commercial contacts with buyers from Brazil and the United States will be included in these business rounds. Furthermore, a round for countries in Southeast Asia is being designed.

Searching for new non-traditional markets is not a whim -the ABC explains-, but it is in line with the positioning strategy that the sector has been defining for some years: to reach markets that only value triple-impact production: flavor, quality and sustainability. In this sense, the Middle East through its culture and economy have a well-defined Premium consumer market.

” This format of virtual business rounds enables all companies, large, medium or small, which are already exploring new markets, to have direct contact with buyers interested in our products,” explains Carla Ginóbili, ABC’s manager and responsible for the coordination of the meetings.

“It is a chance for ABC’s member companies to have direct contact that otherwise might be more complicated on an individual basis due to the cultural conditions on both sides,” she explains.

Countries were chosen, for this first virtual experience,where the market for Argentine blueberries was already open but not yet explored by exporters, “markets that are not traditional but are starting with an emerging demand from high purchasing power sectors of their society, who have the capacity to buy blueberries. Argentina wants to reach these niches with its quality and tasty product”, Ginobili explains.

2021 is the first year of virtual rounds, which have already been held with the Kingdom of Saudi Arabia, the United Arab Emirates and Qatar.  Others are being planned to be held with the United States, Brazil and Southeast Asian countries.

Over a period of two months, ABC has planned five rounds to be completed in the next weeks, a frequency that would have been impossible in a non-virtual mode.  On average, 10 companies take part in these rounds (there are 15 ABC partners), which accounts for almost 70% participation of the partners. On the other hand, between 8 and 10 importers take part.

Profile of the Middle East buyer

Before the business round, the Foreign Affairs Ministry and the Argentine Embassy in the buying country carry out a market research on the main fruit buyers. Important supermarkets and direct importers are contacted. We seek direct contact with those responsible for purchasing who are really interested and we look for profiles interested in blueberries and fine fruits in general.

“Meetings are very dynamic and held on a one-to-one basis, so that parties can make private offers and listen to requests,” ABC explains. “Buyers already have a profile of the companies interested in the project. We are looking for the greatest compatibility in order to set up bilateral meetings”.

Regarding the role of the State in management, Ginóbili explains that “organic and official contact with the State is highly appreciated by importers, especially in Arab countries, since they feel supported by the fact that the government is endorsing the activity”.

According to the Argentine representation abroad, another characteristic of Arab countries is that they seek for long-term businesses, they do not want one-time operations but consistent relationships over time. Regarding the quality of the fruit, they value sweet flavor and recognize that Argentina is located at a latitude where this sweetness can be found in blueberries.  They highly value social and agricultural certifications, “it is a guarantee for them”, as they state.

The potential market for the blueberry sector in countries under the jurisdiction of the Embassy to the Kingdom of Saudi Arabia (which includes the Kingdom of Bahrain, Oman and Yemen) is estimated at around 15 million dollars per year, wheretoday exports from our countryare still at marginal level. Saudi Arabia imports 90% of the food it consumes, with annual imports over USD 25 billion.

With respect to the United Arab Emirates, importers are very choosy with exporters. In general, they know all the characteristics of the fruit and meetings have to be very expeditious. There is a very high purchasing power in the country and a gastronomic route where Premium products are highly demanded. It is a large and competitive market, “that is why the participation of the Embassy is key because otherwise it is very difficult for customers to access such premium markets”, as explained.

Qatar, on the other hand, is a very small market and they look for quality above all. There are 5 or 6 buyers in total and all of them take part in the business rounds.