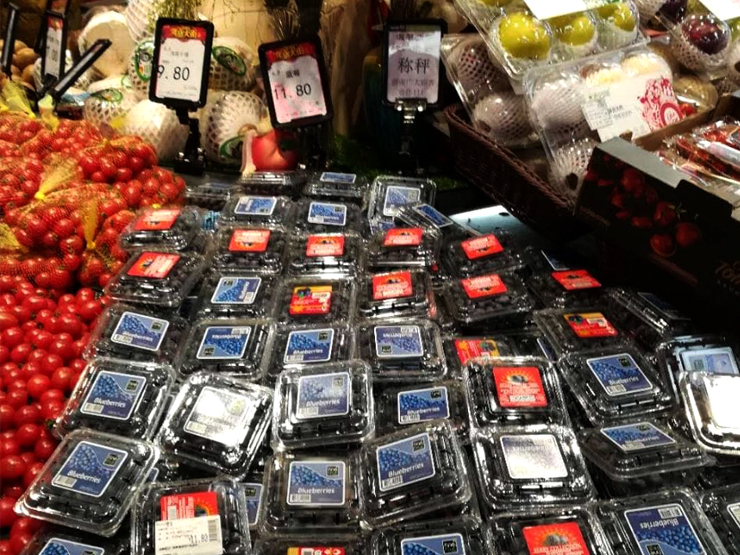 Betina Ernst – Top Info Marketing SA
Blueberry is the most successful fruit in recent years. Its supply and demand increase year after year and it became global, being present on all continents. This led to strong competition between providers, which became increasingly difficult. Another challenge is the demands of the modern consumer. The question that arises is whether the production and commercialization of blueberries will be able to fulfill them, to ensure future success or will it be a shooting star that will disappear again.

The blueberry, as a local and seasonal product, has long since passed into history. In a few years this fruit has become globalized, as only few other products have achieved. It is currently cultivated from the equator to the northern and southern extremes of the continents. Most of the fruit-growing countries have ventured to a lesser or greater extent in this crop. Traditional producers, such as the USA, Canada, Poland and Germany, are currently facing increasing competition from the latest winners; such as Peru, Mexico, Morocco, Eastern Europe or China. Every year new countries begin to produce it, some of which would never have been thought to be suitable for this crop. Such is the case of Colombia, Ecuador, Zimbabwe, Zambia, Namibia or Kenya. All of this led to an explosion of blueberry cultivation throughout the world and throughout the year.

But the increase in this business led to new challenges. Many unknowns arise such as:

Will there be enough market for the large production expected?

How will the different countries rank among all the providers?

What will happen to prices, will they continue to fall and complicate profitability?

Will there be enough diversification and Added value, to prevent it from becoming a commodity?

Will a sufficiently sustainable production be achieved, that meets the demands of future generations?

Great production throughout the year

Currently there are blueberries throughout the year. The seasons overlap and commercial windows practically disappeared. Production increased the most between the northern and the southern seasons. The different providers no longer compete only with their peers at the same latitude, but also with those from other latitudes. There is a time in the year when there is a great overlap. For example, in the USE during March Chile, Peru, Mexico and Florida coincide; in Europe: Chile, Peru, Morocco and Spain. Only in the middle of the campaign, suppliers from each hemisphere clearly predominate. For example, in January it is Chile and Peru. From June to August it is the local producers. Competition is generated between them; as can be the German production, with the Dutch, Polish and Serbian. In the USA it is that of the different states.

The increase in supply and the emergence of suppliers with lower costs, led to a price adjustment throughout the chain. This favored trade. Blueberry became more popular and ceased to be a luxury product. On the other hand, the increase in promotions and the fact that the blueberry is sought after by the chains to attract buyers, greatly helped to increase sales. The downside is the lower prices paid to producers. These have to be more and more efficient in order to compete. But the difference in costs between countries is very marked, especially the labor costs. In Eastern European countries (Serbia, Romania) it is 3 to 4 times lower than in Western countries (France, Holland, Germany). Even greater is the difference with countries such as Peru, Ukraine or South Africa, where the hourly value is 8 to 9 times lower. There is no efficiency that can compensate for it. Producers aim to distinguish their product through quality, form of production (organic), presentation, regionalization (offered as local fruit) or form of commercialization (direct sale of the farm).

The modern consumer demands that the product they buy comes from sustainable production. For which they inform themselves, read, let themselves be influenced by social media, etc. This point will acquire increasing importance. Productions that fail to meet the requirements may have serious problems and even be left out of the system. There are aspects that are considered relevant, such as the use of water and energy, the emission of greenhouse gases, the impact on biodiversity, transport, etc., as well as social aspects. The question that arises is whether the blueberry productions in the different regions will be able to withstand the sustainability test.

The blueberry as a fruit has many advantages: flavor, color, health and practicality. But there is a great weakness that is the need for plastic packaging. Today’s consumer pays a lot of attention to packaging in the fruit and vegetable trade. Hard work is being done to eliminate, reduce, and recycle packaging. News about greener alternatives is constantly published, be it with natural materials, reducing the use of plastic or recycling. Public pressure is such that in countries such as France and Spain regulations were published prohibiting the use of plastic in fruits and vegetables from 2022 and 2023. For blueberries, along with the remaining berries, this is a complicated issue, as no viable alternative to plastic has yet been found.

Regarding this issue, the trend towards the use of larger packages can be highlighted, which is a way to reduce the impact of packaging material on the amount of fruit purchased.