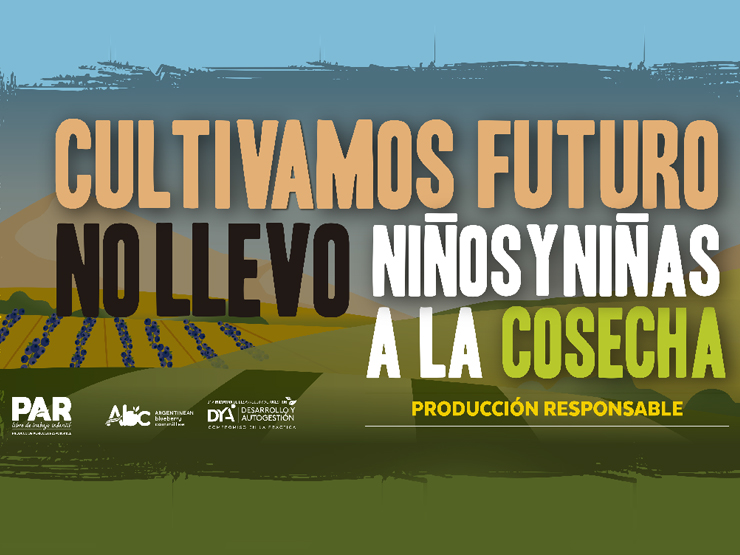 Throughout the country, this blueberry season a system involving harvesters, contractors, producers, municipalities and unions is being applied.

They seek to install the regulations for the protection of children and adolescents in the grower communities. The use of an app allows the early detection of minors in operations and the activation of an alert.

The Argentine blueberry, a responsible crop

Argentina is an exemplary country in terms of social responsibility, with laws that protect workers in an increasingly competitive world where many times decent work is not adequately valued and purchases are determined by prioritizing only the variable cost.

In 2015, the country assumed the commitments of the Sustainable Development Goals (SDGs) set by the UN, among which are decent work and the eradication of child labor. In addition to adhering to these international guidelines and promoting production based on triple-impact, at the local level the Argentine Blueberry Committee (ABC) is also part of the Network of Companies against Child Labor which is governed by the National Plan for the Prevention and Eradication of Child Labor and Protection of Adolescent Labor.

In line with those commitments, this productive sector in Argentina is committed to presenting a product with very high quality standards, which are reflected in the certifications of good agricultural and social practices to which the sector subscribes.

The differentiation strategy of the Argentine blueberry is focused on three pillars: flavor, organic production and responsible work.

The blueberry harvest began strongly in October and is expected to be completed by early January. Although production in 2020 will be at similar levels to previous years, the sector is not oblivious to the social impact that the pandemic is generating in the country: increased poverty, higher unemployment, and the lack of protection for vulnerable populations.

For more than a year, the Argentinean Blueberry Committee (ABC) – of which the Association of Blueberries Producers of the Argentine Mesopotamia (APAMA) is a member – together with Desarrollo y Autogestión (DyA), an NGO specialized in the prevention and eradication of child labor, have been working to implement a voluntary “social compliance system” in the fields. This is a series of preventative actions, monitoring protocols, and care to prevent needs from translating into child labor and to promote the education of children and adolescents.

Tucumán and Entre Ríos are the two productive zones that joined the PAR project (Responsible Agricultural Production) with the piloting of the system in three companies: PDJ, KINGBERRY and EXTRABERRIES. The model promotes responsible production and strengthens community education and health services, for which it has the commitment of the provincial and municipal governments, the National Ministry of Labor and the Argentine Union of Rural Workers and Stevedores (UATRE)
UATRE and the National Registry of Rural Workers and Employers (RENATRE).

Three pillars of the system: prevention, monitoring and care.

For prevention, training workshops have already been held and communication campaigns have been activated in the territories with graphic pieces and social networks.

For monitoring, an exclusive app was developed that contractors, those responsible for fields and producers all have in their devices to detect, alert and attend to possible situations in which a minor tries to enter a productive field. This app triggers an alert to the communities’ social service areas to attend to the case.

And for the attention, alliances were agreed with foundations, companies and unions to carry out Corporate Social Responsibility (CSR) actions such as digital educational points, the construction of care centers in rural communities, occupational training workshops for adolescents, among others.

“From ABC we have been working on the development and execution of a national social strategy. The design of this Social Compliance System is a key link in our strategy and puts the focus on workers and their families. We are convinced that the prevention and awareness of child labor can only be achieved by working together at the national, provincial and municipal levels. Our priority is to promote education and decent work and that is what we are doing,” explained Federico Bayá, president of ABC.

“In times of pandemic, preventing child labor in production chains led us to generate new strategies of care and protection and adjust the model to a much more complex reality. Faced with a scenario like the current one, where there is a greater probability of child labor incidence, it is vital the articulation between the public and private sectors to effectively reach families with a solid network of educational and health services,” said Maró Guerrero, director of DyA.