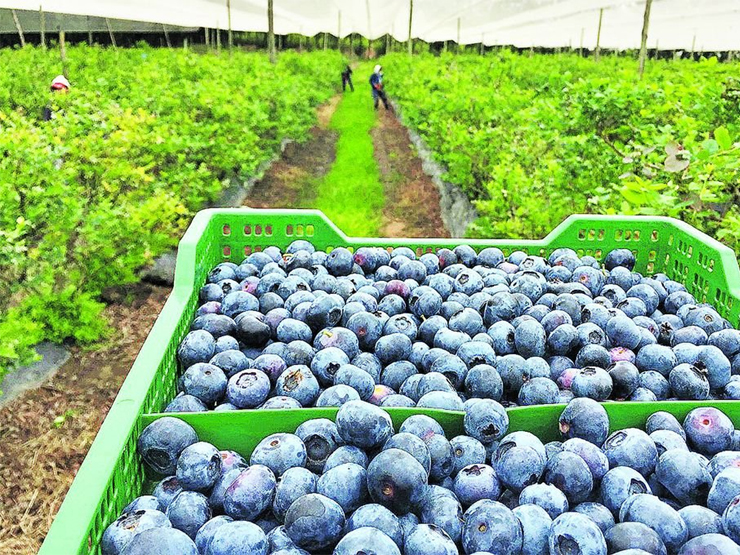 The pandemic turned the world upside down. Nobody imagined how in a few months everything was going to change, how to face life, perspectives, priorities, interpersonal relationships, business, etc. We are still in the midst of the hurricane and how it will end is still uncertain. But something is clear, nothing will be as before.

Some will come out as winners, some as losers. There is no doubt that fruits are one of the winners and within them, especially the blueberries. The pandemic changed the importance of different aspects of life. Health came to the fore and what better way to obtain it through healthy eating. Blueberry is one of the fruits with the best image of health. The numerous advertising campaigns regarding its benefits are now paying off. Not only its health seal contributed to its success, but also its other qualities such as its exquisite flavor, its intense blue coloration attractive to the eyes, its practicality (small size, individual portions, easy transport) and multiple consumption opportunities.

For all this, the blueberry industry in Argentina is facing a great opportunity, both in the export markets, as well as locally. The production of blueberries in Argentina overcame several cycles, going from explosive growth, to retraction, to the relocation of the producing regions, the reorganization of the companies, the varietal replacement, the need to incorporate new technologies, etc. Argentina was the typical early supplier. When its production began in Argentina, it was practically alone in the markets during October and November. Its industry was based on starting as soon as possible, for which it implanted early varieties, looked for precocious regions and prioritized air freight. But the emergence of very strong competitors in the same commercial window, forced a radical change in strategy. There was a shift towards higher quality production, thanks to the good climate and the implementation of genetically new varieties. The Argentine blueberry stands out for its special flavor, and is sought after by gourmet buyers, having niche markets. But for the industry to be globally competitive, many challenges remain to be solved, such as greater varietal replacement, the shift towards maritime shipping, increase in productivity, reduction of local costs and incorporation of more advanced technologies.

The work that has been done for several seasons is beginning to fructify. In the season that has just started, half of the blueberries were shipped by sea. In other years the percentage of sea shipments only reached 20-30%. Another achievement was the opening of the Chinese market. A reduction in tariffs is currently being negotiated to be competitive with other suppliers. On the other hand, producers are making a great effort to replace varieties towards those that can maintain their quality also during sea shipments. Another point that is being worked on is the incorporation of new technologies, such as tunnels, which would reduce the effects of inclement weather and ensure a constant supply of quality fruit to foreign markets.

Argentina is strongly committed to become a superior quality supplier, consistent and reliable. The intention is to explore more profoundly the markets that appreciate the flavor of Argentine blueberries.

Another segment of the industry that is advancing rapidly is organic production. In 2019, 15% of exports were organic. In the current season the aim is to double that share. Again, the pandemic helps this form of production to become more important. Consumers seek a healthy life, they have turned to the more natural and many prefer to buy organic fruit instead of conventional. Organic higher price is not holding back the sales. Many buyers are willing to pay more for something they consider healthier.

Unlike the other southern hemisphere blueberry producers, Argentina has the advantage of having an important local market. So far the local consumption of blueberries is very low, but is showing a clear upward trend. The different advertising campaigns that the Blueberry Committee has carried out in recent years, helped this growth. Now the pandemic will surely act as a trigger for this trend to become even more pronounced. The prices paid are attractive, turning the local market an alternative to be considered.

Recent years were not easy for the Argentine blueberry industry. This year also presents its challenges, but there are good perspectives that the pandemic will help overcome them and that both sales and prices for the season that is starting will be attractive.